In the Face of the Wind and Rain We Shoulder Together! Far East Horizon Fights the Flood with One Heart.
TopHotNew

Since late July, Henan Province has continued to experience extremely devastating rainfall. Severe floods have occurred in cities like Zhengzhou. The severe flooding, which has been rarely seen in history, has moved all people and has attracted their attentions. All fronts of Far East Horizon Finance and Industry played their own strengths to participate in emergency rescues and disaster relief work. The Group promptly sent warm condolences to employees and their families affected by the disaster in Henan. The Horizon Charity Foundation quickly donated relief supplies through social sectors…In the violent storm, a spiritual dam of “unbreakable” was built by the figures of the Far East, who worked hand in hand and helped each other.

Horizon Construction Development Co.Ltd. : Self-help and mutual assistance without abandoning or giving up

“The water was 3 meters deep…was trapped for more than 40 hours…helped a family of 7 people…the youngest was only 3 or 4 years old…only one pack of instant noodles remained…” Unimaginable dangers descended upon Horizon C&D’s Xinxiang branch. On the afternoon of July 21, Wang Kunpeng, the head of the Xinxiang branch, and his colleagues were trapped on the roof of the dormitory in Muye District, Xinxiang. Then he reported the situation to the company as soon as possible, and at the same time released the help-seeking information through various channels. As nights fell, signs of danger appeared everywhere: nearby transformers exploded on after another and the exterior walls, which is saturated by flood, collapsed… 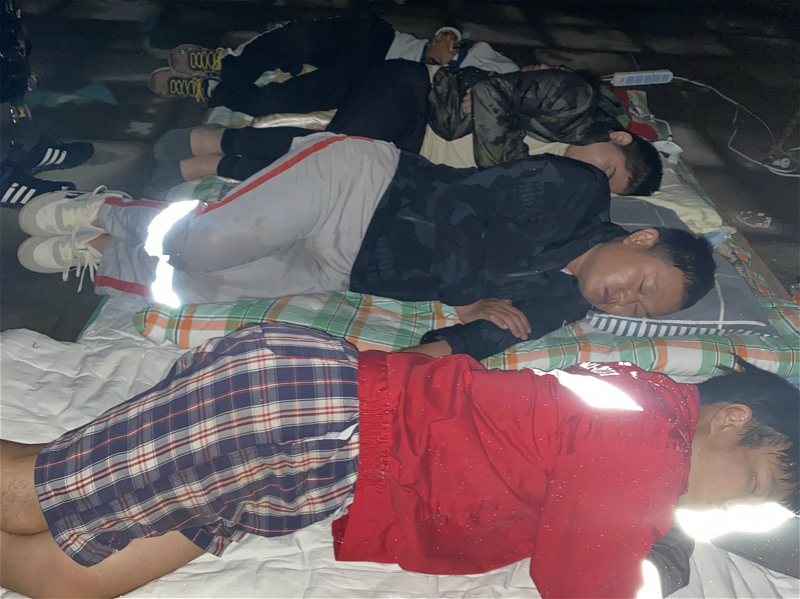 On the evening of July 21st, the trapped employees of Horizon C&D slept on the roof of the Xinxiang branch

In the early morning of the next day, Wang Kunpeng and his colleagues saw a couple and an old man wading from a distance pushing two large basins as the depth of the water has already submerged their necks. They rushed to help. It surprised them that there were 4 children sitting in the basin. The youngest is only 3 or 4 years old and one of them was still having a fever. Although the employees of the Xinxiang branch were also facing the shortage of supplies, they still allocated half of supplies to help the unfamiliar refugees. On the evening of the 22nd, there was only one pack of instant noodles left. However, Wang, with his own accord, distributed this bowl of noodles to four children.

Here they all helped each other and the other side people was also rushing to help. Messages for help were constantly being forwarded and reposted. Three groups of volunteers drove a forklift to the vicinity of the disaster area, but they had to give up temporarily due to the excessive depth of the water. As Wang Kunpeng’s direct leader, Jiang Tao, the Henan regional director of Horizon C&D Aerial Work Platform, tried every means for two days in Zhengzhou and finally contacted a park who was willing to rent him an excursion boat. 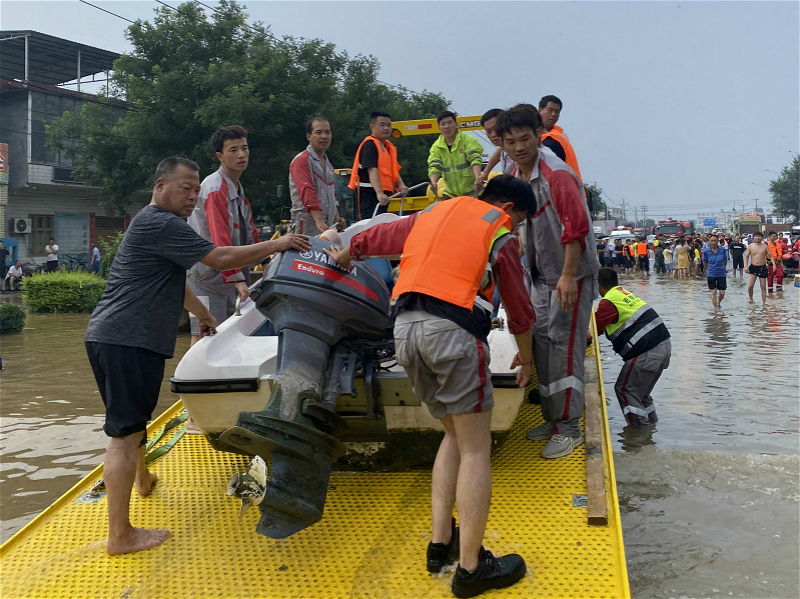 Jiang Tao and his colleagues loaded the speedboat to Xinxiang 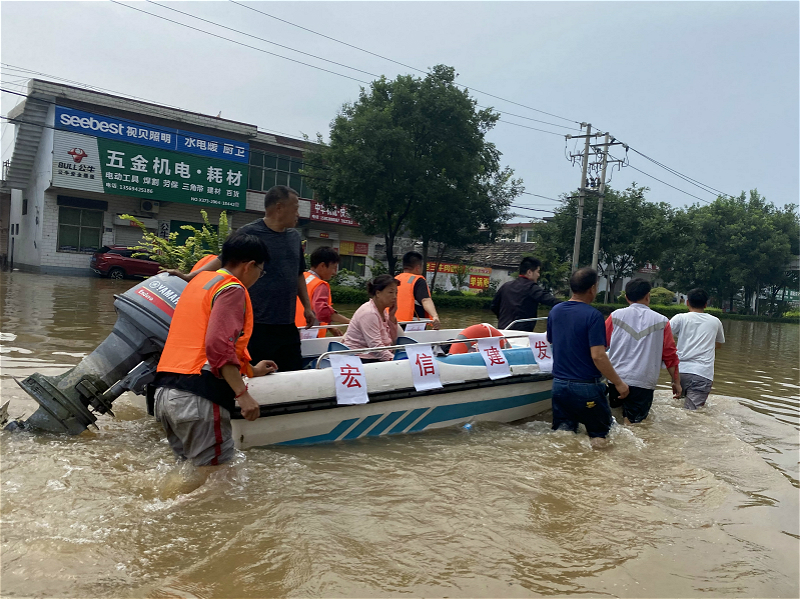 On the morning of the 23rd, Jiang Tao drove his own wrecker and speedboat, and rushed to Xinxiang 150 kilometers away with 5 colleagues and 2 speedboat drivers. After a long journey, he finally rushed to the factory area where Wang Kunpeng was located in the afternoon. “I remember very clearly that the time our leader came was 14:07.” Wang said. Everyone was very excited to see the speedboat coming by, shouting” Come here! Come here!”

the speedboat carried the trapped people and moved first 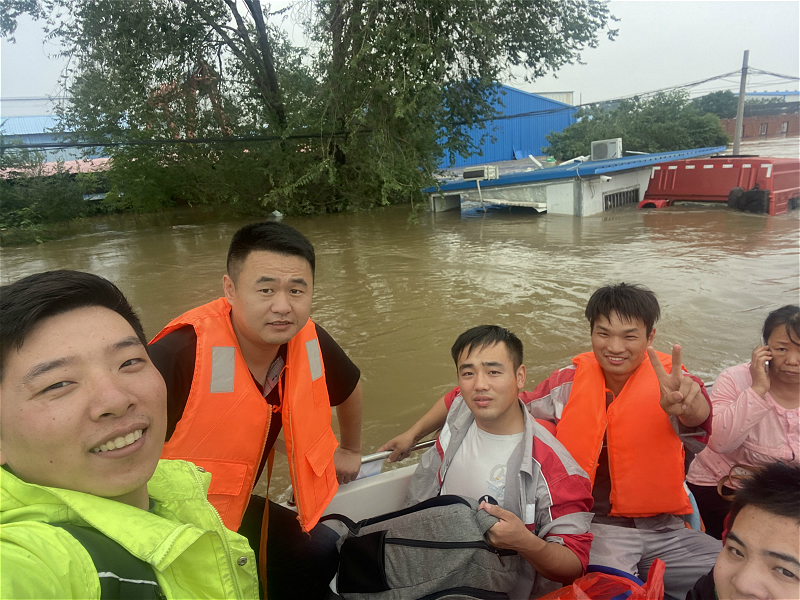 In fact, it was not only 6 employees and a family of 7 who were trapped this time. The 9 people nearby were also in very dangerous situations. Regardless of their fatigue, the employees of Horizon C&D did not leave until they succeeded in helping the refugees and the disaster-stricken people move to a safe shelter. This speedboat rented from 150 kilometers away eventually rescued 22 people. Wang, who was out of danger, wrote in WeChat Moments: The Horizon Family cares about employees. When disaster strikes, they will not abandon or never give up!

Horizon Healthcare: Firstline emergency personnel set off after hearing the “flood” and move toward danger

“Thanks for coming from afar! The hospital will provide free treatment. Please rest assured and recover as soon as possible.” Said Liu Taijiang, director of the Xinxiang Union League Hospital, while visiting the injured members of the Shandong Zibo Red Wolf rescue team. 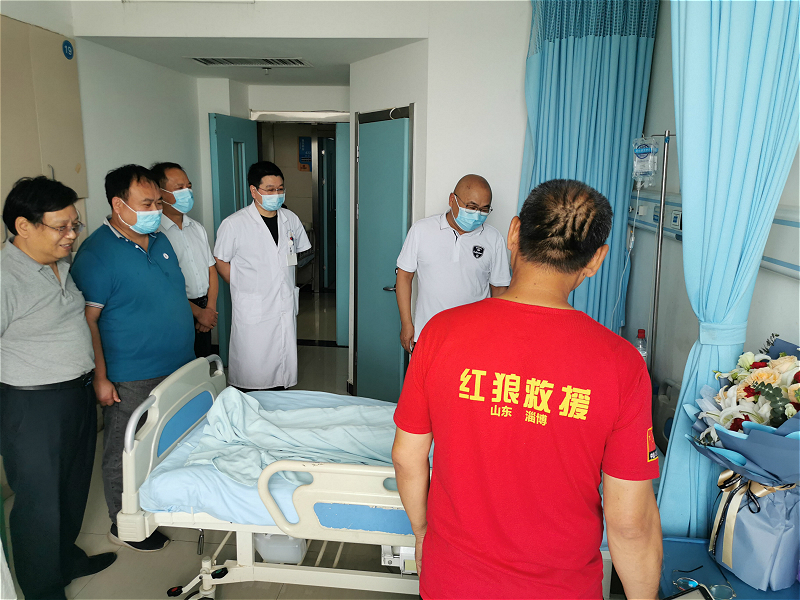 It was a member hospital of Horizon Health in Xinxiang, Henan Province, and was also in the “eye of the storm” this time. The whole medical staff of the hospital have been fighting for days and they have been actively involved in the first line of rescue and treatment while helping themselves. They have received nearly 300 disaster-stricken people and nearly 100 people by ambulances with emergency dispatch of more than 10 medical staff.

It was a member hospital of Horizon Health in Xinxiang, Henan Province, and was also in the “eye of the storm” this time. The whole medical staff of the hospital have been fighting for days and they have been actively involved in the first line of rescue and treatment while helping themselves. They have received nearly 300 disaster-stricken people and nearly 100 people by ambulances with emergency dispatch of more than 10 medical staff.

In the resettlement sites, the dean and experts led a team to make visits so that the displaced folks had a “relief pill”. On the flood control embankment, they stood firmly on the front line against the heat, inspected and treated on the spot when there were wounded, and at the same time comforted the flood-afflicted people when there were no wounded. They interpreted selfless love and responsibility with practical actions.

On the afternoon of July 20th, Far East Pratty and Whitney’s manager Shen Jiangang, who made call on some customers in Xinxiang in the rain, planned to drive back to Zhengzhou by himself. When he reached an intersection, the standing water almost covered the hood and the fault light on the dashboard flashed continuously. He hurried to the side of the road before the car was turned off. Shen did not find a hotel nearby to stay until the trailer arrived at 8 or 9 in the evening. The hotel was damp and even leaking, but it was a blessing to have a place for shelter.

Being trapped in the hotel, Shen JIangang did not delay for a moment. He called the customers one by one to express condolences and learnt about their safety and the flood situation. Knowing that a customer in Zhengzhou was flooded with raw materials, finished products and equipment due to flooding and that there was no network, no electricity and even no water, Shen immediately contacted multiple parties for insurance claims and provided timely information through SMS to help customers solve their urgent needs. 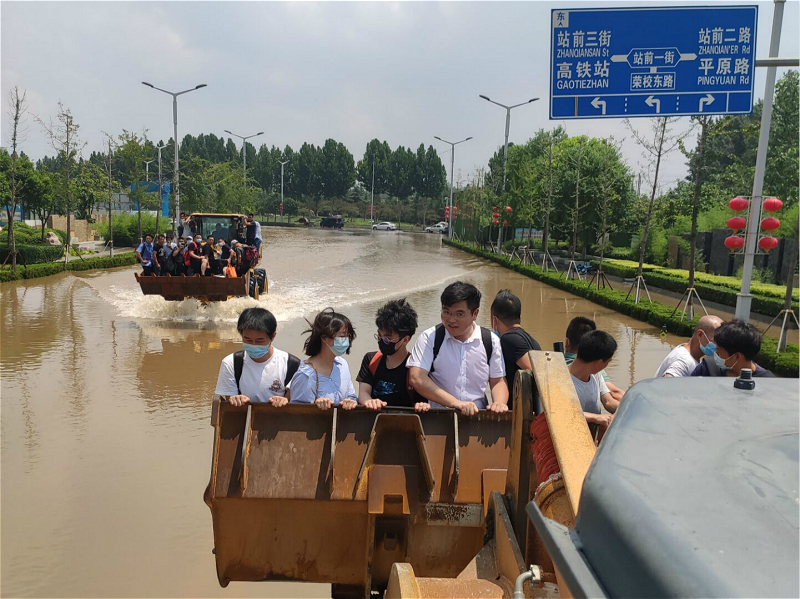 On July 24, Shen finally bought a railway ticket from Xinxiang to Zhengzhou. Since public transportation was interrupted, Shen rode a shared bicycle for more than an hour to reach the station. Due to the low-lying terrain of the station, he could only be transported by forklift. “Standing on it is literally scary. The deepest place nearby can submerge the roof of a car. You can see those cars floating when a forklift is driving past.” In retrospect, some uneasiness still lurked in his mind.

After a short break at the weekend, Shen returned to Xinxiang and visited three customers on July 27th. “Small- and medium-sized enterprises are really not easy.” Shen expressed sincerely for customers in the industrial entity from the bottom of the heart. Many customers were still busy with disaster relief and resumption of production, so they must do everything they can to solve their problems.

Traditional business: Prevention of a major epidemic after a violent disaster and an offer of assistance across obstacles

In Zhengzhou on July 24th, standing water, fallen trees and collapsed roads…the damages to the cities caused by the once-in-a-year flood has not faded. Bypassing numerous obstacles, Li Jiangao, the account manager of the People’s Livelihood Consumer Business Department of Far East Leasing, Ma Ning and three other colleagues visited more than 10 customers in Zhengzhou and surrounding areas and sent emergency supplies such as disinfectant. 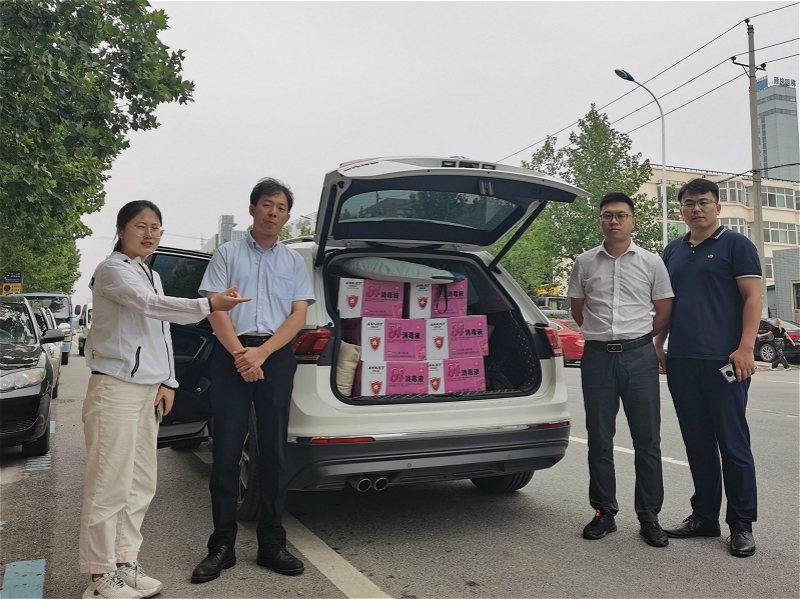 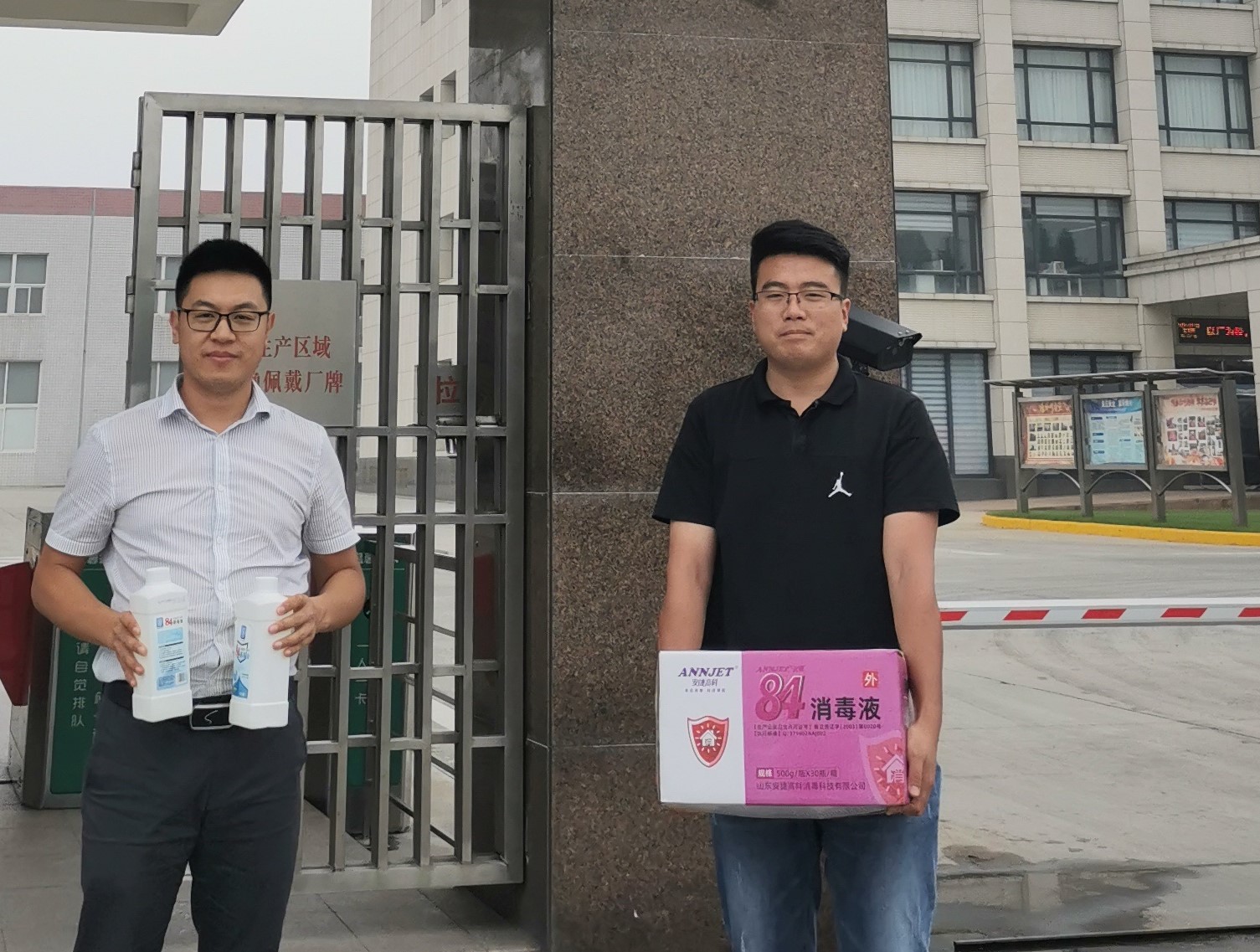 “After collaborating with so many financial institutions, I feel quite warm when I see the Far East at this critical time.” A client was surprised and moved when he saw Li and Ma.

Prevented the COVID-19 after the flooding, and strived to disinfect and return to work. Some customers were companies that guarantee the supply of consumer goods such as food and beverage, agricultural and side-line product processing, supermarket retail, packaging and printing, etc., whether they can resume work in a timely manner will directly affect whether the supply of local epidemic prevention materials and daily necessities can be guaranteed. Taking account into it, the Henan regional team, in the case of multiple pharmacies out of stock, coordinated resources to raise a batch of disinfection materials, which were delivered to customers at the earliest opportunity to assist the company in overcoming difficulties and resuming production as soon as possible.

Group care: passing warmth and drawing up rainbow together

In the face of major natural disasters, Far East Horizon attached great importance to the safety of every employee. Company leaders immediately expressed their concern and condolences to the Far East people who were in the disaster area and affected by the flood. The Zhengzhou office counted the location of all employees in time, confirmed the safety of each employee in real time, solved temporary accommodation problems for the residents, spared no effort to protect the basic living needs of employees, and built a harbour for employees to belong in weathering the difficult times. The Labour Union of Far East Leasing issued condolence money and letters to employees working in Henan or their immediate family members in Henan. At the same time, they also provided donations to Horizon C&D and Horizon Health respectively for the condolences of Henan employees and their families. Disasters are merciless but love exists forever and everywhere. The supplies donated by the Horizon Charity Foundation in combination with social forces have also arrived in Henan recently, and the love and warmth will be delivered to the people in the disaster area quickly.

At present, disaster relief is still continuing and heavy rains occur from time to time. Fat Easterners on all fronts will strengthen their faith, depend upon each other, face the difficulties and dangers and be preserving. With the joint efforts of everyone, a rainbow will finally appear after the storm!

Previous: World Environment Day ▏FAR EAST HORIZON is Committed to Caring for Nature!
Next:  None